You are here: Home / Personal / 6 Weeks With Logan Felix

Before we even knew we were expecting, Caitlyn and I decided that we wanted to keep the gender unknown until the birth of the baby. Our reasoning was that there are very few opportunities for a genuine surprise in today’s world. I got such a kick on how much this irked other people. Plus, it was so fun to speculate with others based on all the old wives’ tales and shape of the bump, and towards the end, both Caitlyn and I were convinced that we were having a little girl. So were about 80% of our friends and family.

But when it came time to call the gender in the delivery room, I looked down a saw a big brown pair of testicles squarely attached to a crying baby, looked at Caitlyn, and quizzically said, “It’s….a……boy?”

Without going too deeply into the birth story, I want to note the strength and resiliency of the woman I married. She labored for about 30 hours at home, showed up to the hospital at 9.5cm dilated (10cm means it’s time to actively push), walked herself to the labor and delivery room and gave birth to Logan like a boss. All unmedicated and on her own terms. Caitlyn is the paragon of educated child birth in the modern age. It was a marvel to witness the whole thing live. Cutting the cord was pretty rad, too. I was shocked at how white it is. I thought it was going to be more of a skin tone color, but it looked like a giant Apple charging cable.

I wanted to give myself some time to write this post because the variety of emotions and feelings I have over being a new dad are pretty disparate.

On one hand, it’s all the amazing warm fuzzies that people rave about. You find yourself staring in awe at this little mirror. It’s like looking at yourself in the past and the future at the same time.

There are so many little surprises in the first few months. I read that the first 3 months of a baby’s life are regarded by medical professionals as a “4th trimester” where the baby goes through incredible developmental leaps outside the womb. Every time I heard him cry, I could only think how Logan sounded like a Pokémon since it was so monotone and in perfect intervals. I loved the little squeak he made between breaths.

At first they sleep something like 20 hours a day. The only time awake being to feed and cry while you change their diaper.

You will go through approximately 300 diapers in the first month of life. You will see the diaper pail pile up and be in awe in how much waste it truly is. A low estimate of diapers in the first year is 2,500. I know that there are some earth-friendly reusable diaper companies out there and we will probably switch when he’s done being breastfed, but at times Logan would go through 5 diapers in a single waking period. And lemme tell you, it’s not as clean as you want it to be. Sometimes it leaks out the sides or shoots up the back if he’s sitting down. In our house, it’s called “Poop Soup”.

I’ve found myself being super bummed out a few times hearing him squeak out another wet one in a fresh diaper as I’m still putting it on for the first time. It all just feels very wasteful.

Diapers also come in a variety of sizes based on the brand. Some of them are huge dumpy potato sacks and some of them are like skinny jeans. The biggest thing to remember is to make sure that liner hugs the butt all the way or else you’ll end up with some sideways squirts that leak out. I know it sounds gross talking so openly about baby shit but once you have a kid yourself, you get over it and just get to work.

Also if you have a boy, make sure his little jimmy is tucked safely inside the diaper. Once I was holding Logan after a change and suddenly felt a felt and wet sensation on my chest. “He’s peeing, isn’t he?” I said looking down at the puddle on my shirt. Caitlyn went to change him and the diaper was completely dry. His little Logan was neatly tucked to the outside of the diaper like a little snorkel to the outside world. Lesson learned.

They say that humans need on average 8 hours of sleep

What they don’t tell you is that babies wake up every three hours (or two hours… or maybe every hour). So that the 8 hours you need will get split up into three chunks and you have to add in an hour in between each chunk to account for nursing and going back to sleep. So that 8 hours of “sleep” is actually more like 10 hours long but you’ll get about 4-6 hours of rest yourself (if you are lucky).

Factor in that newborns ought to sleep in the same room as you to prevent SIDS and you’ll get accustomed to all the random guttural noises that babies make. The first few weeks I only slept on one side facing the baby so that I could leap into action in the middle of the night. And that shit happened a lot.

It’ll be 4am and your kid will start grunting and then their breathing will become sporadic, they’ll start fussing and the moment you get up to check on them, they’ll quiet down like nothing happened. I think screwing with your parents is innate from birth.

If you have multiple hobbies, you get to choose 1… maybe 2

Growing up, you are often reminded of what a time commitment it is to have a child. Adults use it as birth control telling teens that they “won’t have a life” anymore. And to be honest, it can feel very true in the first few weeks.

Logan isn’t a needy baby but when he’s awake, he prefers to be held. And if he’s being held, he wants to be bounced. And when you’re bouncing him, you have to use both hands. And somehow, from the beginning he knew if you tried to do this while sitting down. He preferred that you stand up and pace around the house. We knew these were his preferences because he cried otherwise.

With all this in mind, even just looking at your phone while holding him was a no-go. Remember? Two hands. And the moment he falls asleep on your chest, you have to be a statue. The slightest movement or even the vibrations from your voice would cause a stir and potentially wake him. It was like a really long game of Chutes and Ladders with no ladders, only chutes. Good luck, maybe you’ll get 5 minutes of Instagram scrolling before he wakes up again.

Looking back, those first few weeks are pretty blurry. You aren’t used to the severe lack of sleep and even something trivial like going to the store real quick seems like a monumental task. You just don’t want to leave your wife and baby home alone. It’s hard to describe.

Now think about all your hobbies. Mine are jiu-jitsu, surfing, photography, and most recently, bass guitar. All of these hobbies involve me leaving the home for multiple hours except playing bass, which I began due to the quarantine lifestyle. These are all now maybe once a week activities.

With COVID, jiu jitsu is an absolute no-go for me. It’s too close with people outside my bubble.

With surfing, the waves can be fickle. With a baby’s schedule, you have little wiggle room when the waves need a little more time to wait for the tide to be just right. I think you get my point.

At a moment’s notice, you’ll have to drop whatever you’re doing and tend to the crying baby. Let’s hope that your hobbies are easy to press pause on. You’ll be doing that often.

Even as I’m writing this blog post, Logan is nappping nearby and each time he stirs, I stop typing, so I can cross my fingers and hope he stays asleep.

In six short weeks, it’s pretty crazy how much he’s grown and changed already. He went from being a cute little potato with a Pokémon voice to an aware infant who is so interested in his environment. He isn’t grabbing stuff with his hands just yet but I know that will come soon enough.

When he wakes up crying and sees me picking him up, I know that he knows his Dada is there. When I hold him, he holds me. When I change him, he looks back at me with trust in his eyes. That doesn’t mean that he doesn’t still screw with me by stubbornly alternating keeping his legs straight or bent while daring me to put on a new diaper. And yes, he still occasionally uses two diapers in one change. I think he does this because he likes to remind me of the old times.

I love this kid. 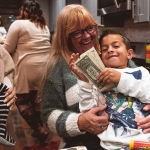 This getting older stuff is actually pretty cool. A few years back, I never would have imagined my early 30’s being so great. Back in my day, we got Thursday and Friday off from school but in my district, they give us the whole week off for Thanksgiving. I guess so many families travel for […] 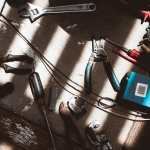 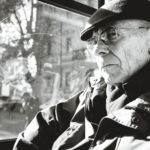 As we walked the streets of Rome, I took it upon myself to be a little more forward with my street shooting. A lot of stuff was shot from the hip, especially on the bus where I couldn’t get away from my subject quickly. However, I had been working on a few techniques of distraction […]